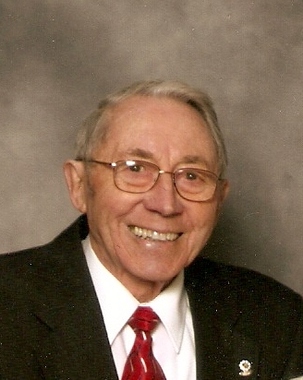 Back to Marvin's story

Marvin Damon Farmer passed away at his home on Thursday, September 5, five months short of his 99th birthday, with his loving family in attendance. He is survived by Virginia, his wife of 71 years, and five children, Damon (Beth) Farmer, Ginger (Frank) Cornett, Robert (Karen) Farmer, Greta (Randy) Miller, Cindy (John III) Kauffman. Nine grandchildren, and 12 great-grandchildren as well as a vast extended family of friends and other relatives.
A resident of Berea since 1952, Marvin was a Beattyville native, leaving there to serve in the Marine Corps in both the Atlantic and Pacific theaters during World War II. Afterwards he was employed at the Blue Grass Army Depot, becoming the senior civilian there before his retirement in 1976.
His extensive community involvement included being a charter member of the Berea Rotary Club; a Deacon, Sunday School teacher and scout leader at Berea Baptist Church; trustee of Campbellsville College and Berea Chamber of Commerce member.
Among the many awards and recognitions he received were a Citation of Achievement from the Kentucky House of Representatives, a 2019 Citizen of the Year award from the Berea Lions Club, a Distinguished Citizen Medal from DAR. He was a Kentucky Colonel and also wrote two books, the autobiographical "Marvin's Story" and the spiritual "One Knee Is Not Enough."
Visitation will be from 6 to 9pm Sunday at Berea Baptist Church. Marvin's life will be celebrated at 11 Monday at the same location. Burial will follow at the Berea Cemetery.
In lieu of flowers, donations may be made to Berea Baptist Church or Hospice Care Plus.
Published on September 6, 2019
To plant a tree in memory of Marvin Damon Farmer, please visit Tribute Store.

Plant a tree in memory
of Marvin

A place to share condolences and memories.
The guestbook expires on December 05, 2019.