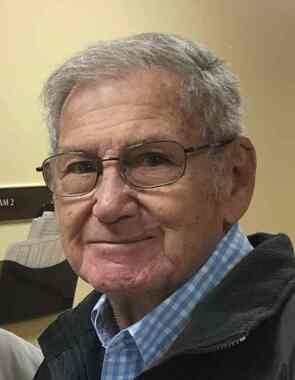 Back to Philip's story

Born December 10, 1934, in Irvington New Jersey, Mr. Reisig was the son of Richard and Margaret Reisig, both of whom preceded him in death. He was also preceded in death by his wife of 60 years, Eugenia Mary, a son, Christopher J. Reisig and a grandson, Philip H. Reisig II.

Philip was a US Army veteran serving in Germany and Austria. He then joined IBM where he was a three-time IBM Means Service Award recipient. He retired after 32 years of service and founded Parts Plus, Inc. in Richmond. He last attended Flatwoods Christian Church, which he enjoyed very much.

Visitation will be from 11 AM - 12 PM Tuesday, December 10, 2019 at Oldham, Roberts & Powell Funeral Home. Graveside service, with military honors, will follow at 12:30 PM Tuesday at the Richmond Cemetery with Rev. Tim Jones officiating.

Grandchildren will serve as pallbearers.

The family would like to give a special thanks to his caregivers, Jennifer, April, Jerry, and Monica and will forever be thankful to Dr. Aktar and his full staff at Richmond's Fresenius Dialysis Clinic, Pam, Alex, Donna, Tara, Sharon, Holly, Taryn and Winona, as well as special friends Joyce Davidson for always looking out for him, Jane McQueen who was so helpful to him and the whole family, Tim Jones for his decades of friendship, Lori for her wonderful care, and Sherry for the blessings she brought us.
Published on December 5, 2019
To plant a tree in memory of Philip Hollister Reisig, please visit Tribute Store.

Plant a tree in memory
of Philip

A place to share condolences and memories.
The guestbook expires on March 04, 2020.