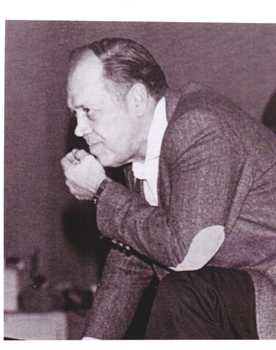 Back to Russell's story

Russell was born in Washington, New Jersey, on June 27, 1929 to John and Elsie Riegel. He began a lifelong relationship with wrestling as a high school student at Washington High School in Washington, New Jersey. He was a four-time New Jersey high school state finalist, winning state championship titles in 1944 and 1946. He wrestled at Gettysburg College where he amassed a collegiate wrestling record of 63-1. Russell was a four-time Middle Atlantic Conference Champion. He continued to wrestle in the Navy while obtaining the rank of LTJG.

Russell Riegel was Hunterdon Central High School's first Athletic Director and Wrestling Coach, a position he held for 35 years from 1956 to 1991. Coach Riegel created the Hunterdon Central Invitational Wrestling Tournament, which is the longest running Holiday Tournament in the Nation. During Coach Riegel's tenure as Athletic Director, Hunterdon Central expanded the athletic program from 4 sports to over 20. He was an early innovator in leading the way for girls' high school athletic programs in the nation. Coach Riegel is believed to be the 2nd winningest high school wrestling coach in the nation with 838 wins. His wrestling team record at Hunterdon Central was an amazing 533 wins, 89 losses and 6 ties. In 1991 he moved to Kentucky where he coached wrestling at Harrison County High School in Kentucky from 1994 to 2010. Russell collected another 305 wins there, bringing his record to an astonishing 838-218-9.

Russell Riegel was inducted into the National Wrestling Hall of Fame in 2002, the Hunterdon Central High School Hall of Fame in 2010 and the Gettysburg College Hall of Athletic Honor in 1984. In 1989 he was Wrestling USA Magazine "Man of the Year." He has coached 12 state wrestling champions in New Jersey and Kentucky. Riegel had 5 undefeated seasons and his wrestling teams were continually ranked in the top 10 teams in New Jersey.

While Coach Riegel's athletic achievements are impressive, what truly speaks to his legacy is how he has touched and impacted the lives of athletes, students, faculty and his community. His teaching, coaching and mentorship helped those who knew him develop and strengthen their self-esteem, leadership and team building; life skills that go beyond sports into creating outstanding adult lives. Coach Riegel was a father figure to all he interacted with.

While the world knew him as "Coach," his family knew him as "Pop" or "Poppy." To the wrestling community, he was an innovative legend, to his family, he was the world. His family will remember him for his fierce love and loyalty. His children will remember him for his presence, always there, steady and strong. His grandchildren will remember him each time they smell black liquorice or hear the pour of an ice cold beer. They will think of him each time the weather is perfect for a day on the golf course, and with every Dairy Queen they pass, they'll have a soft serve in his honor.

Russell was preceded in death by his father, John, and his mother, Elsie; a son, Kevin Riegel; and a granddaughter, Taylor Hadley. He is survived by his wife, Melissa Frances Riegel, three daughters, Kim Eubanks (Michael), Debbie Schmidt (James), and Kelly Hadley; 5 grandchildren and 9 great-grandchildren.

A celebration of life will be conducted at 3:00 p.m. at Oldham, Roberts, and Powell Funeral Home on Saturday, November 23, 2019. With family gathering from 1:00 until service time at 3:00 p.m. In lieu of flowers, donations can be made in his name to Madison County EMS, 400 Hwy. 1016, Berea, KY 40403, or Hospice Care Plus Compassionate Care Center Central Office, 208 Kidd Drive, Berea, KY 40403. Condolences may be made at http://orpfh.com.
Published on November 14, 2019
To plant a tree in memory of Russell Kenneth Riegel, please visit Tribute Store.

Plant a tree in memory
of Russell

A place to share condolences and memories.
The guestbook expires on February 12, 2020.